Chris Faraone is an award-winning journalist (AAN, NENPA), a former Boston Phoenix Staff Writer, the current Editor of DigBoston, and an adjunct professor of communications at Salem State University. He has more than a decade of media experience, has published four books on his own imprint, and has written features for publications ranging from The American Prospect to BuzzFeed. He co-founded the Boston Institute for Nonprofit Journalism, and has also co-written books with legendary hip-hop acts including Cypress Hill and Raekwon.

I have written and published thousands of reviews and articles, but there have also been a few written about me and projects I’ve been involved with. Here are some of them …

Plus I dispense media and journalism advice, both solicited as well as unsolicited 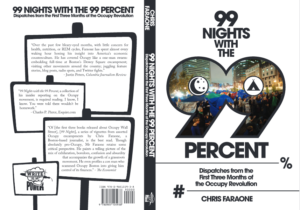 GET YOUR COPY of my 99 Nights with the 99 Percent: Dispatches from the first three months of the Occupy Revolution reissue

Friend telling me their parents won't join them for a trip to the science museum with the grandkids because of mask mandates in the liberal city. Fox News viewers always thinking about family first.

It's unbelievable how many articles I've written in which one Harvard person is perpetuating a problem and another Harvard person is opining about how bad that thing is. Come to your own conclusions. This is just something I ran into writing today, hardly the first time.

I love when publicists send emails that include the words "new client." Thanks for reminding me that you are being paid to pretend that you give a shit about this thing. The relentless hubris of these cockroaches.